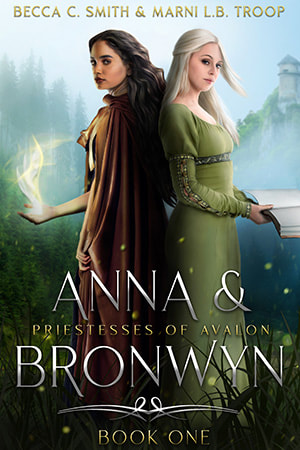 In the time of the great King Arthur, there was an island in the mists called Avalon where, in the shadows of history, the much greater force of magic was used to shape the course of humanity.

Anna and Bronwyn, two young Priestesses-in-training, don’t know it yet, but they will rule Avalon someday. The only problem? They can’t stand each other.

Needing the girls to not only be civil to each other but also to learn the essence of teamwork is of the utmost importance to the current High Priestesses. In order to teach the girls to work together, they bind Anna and Bronwyn in magic, then release them into the world and away from Avalon.

Their first destination: Camelot, and upon arrival, they find that something nefarious is going on that may endanger King Arthur’s life. The girls must resolve their differences in order to save the king and possibly all of England.

THE HEART OF IRELAND SERIES
BY MARNI L.B. TROOP

The Final Chapter of 'The Riser Saga' & 'The Atlas Series'

Kala Hicks has been Atlas for 300 years, committing unspeakable acts every four days to keep the world spinning, and she’s mentally exhausted. Her only shred of hope to end it is a prophecy that says the Atlas curse will be broken by Chelsan Derée. Upon Kala seeing her newest mission in a vision, she knows it’s finally time.

Chelsan, on the other hand, not only has no idea that gods, demons and angels exist, but that she is the one person in the entire world who can break Kala’s curse, and she has zero clue as to how to do it. What’s worse is that Kala’s newest mission is something that Chelsan would destroy everything in her path to make sure that Kala fails at.

Will Chelsan fulfill the prophecy to save Kala from her curse? Or will she let the world burn to save the one she loves most?

AN ACT OF NATURE
BY M. WILL SMITH

This story is told in three separate novels. The novels are together under one cover because it is about three different groups of survivors during a two hundred year period following a worldwide nuclear war. Each novel has its own characters and each can stand alone. But, in the end, all of the characters and their stories come together.

The first part happens at the end of this two hundred year period in a isolated area along the California coast where some survivors were being forced to live under strict rules dictated by a powerful group known as the Controllers.

The second part is about a group of people who were living in a cave where they had gone for protection from the impending war. After forty years in the cave, they wanted to return to the surface, but their leader, for personal reasons, did not want them to go up. It is about their mutiny and what happened when they returned to the surface.

The last part is about a group that managed to escape the war by traveling far away to another planet. They were a group of teenagers who were kidnapped and made immortal by a woman whose overall plan was never clear. After more than a century on the planet, she decided to erase the immortality of a select few of them. But the teens take over and decide to return to Earth to restore the immortality for those few. On Earth they eventually meet the other two groups of survivors and the identity of the Controllers and their purpose becomes known.
​
This three-part story is about what could happen if the competition for everything was eventually settled when all sides were armed with unimaginably large quantities of the ultimate weapon which was specifically developed to kill fellow human beings. This was survival of the fittest in the nuclear age.

REVELATION
BY M. WILL SMITH

Morey Baum has just made one of the most significant discoveries in all of science. Linking a quantum computer directly to his brain, he was able to visualize the origin of the universe and see solutions to problems that the rest of the scientific community struggled with for decades. He is unable to announce it to anyone because it has been impossible for him to transcribe it into words or mathematics. To add to his predicament, he has a terminal condition and only months to live. So he must try to pass his revelation on to someone who can carry his work forward. He has chosen a close colleague, Megan O’Brien. Megan’s religious beliefs are making it difficult for her to accept this honor despite her intense interest and desire as a scientist. In the meantime, others are attempting to either steal or destroy the discovery. And so begins a wild ride to escape the conspirators and at the same time find ways to bring his discovery to the scientific community in an understandable form. Along the way Morey and Megan get help from several unlikely sources when some of their pursuers become their allies. The story is about how intense professional competition, greed and dogmatic beliefs can sometimes get in the way of rational judgment and the search for truth.